SOPAS! Sopas is what my Filipino culture is deeply craving when it comes to comfort food during cold days, “I’m feeling blue” days or sick days. The creaminess is the highlight of the soup, which comes from the evaporated milk as if almost by magic. My vegan side needed to find an excellent alternative to evaporated milk. It turns out that cashew milk is a fantastic substitute. Honestly, I have heard of the soup for a long time, but for the life of me, I never thought of trying to cook and convert it into a vegan recipe until last week.

The first time I tried making the soup, it was a hit. On the second try, I replaced the cabbage with kale. That was my husband’s suggestion, and it gave the soup that deep green boost. The third attempt was when I made a video for my Youtube channel. The Sopas is served best while freshly made before the elbow pasta absorbs all the liquid. That’s when you can have that comforting soup slurp rush. Leftover soup is still delicious, aside from its thick texture. I can continue talking about how delicious Sopas is, but I’m starving now, so let’s get started!

I like to pre-plan and make my cashew milk. Making cashew milk requires soaking cashew overnight in the fridge. If you don’t have the time to soak the cashews, get pre-made plain cashew milk which you can find in any supermarket.

Put 1/2 cup of cashew and about 2 cups of water to cover over cashew in a mason jar. Close the mason jar and let it soak in the fridge overnight. Eight hours of soaking time during the day will also do if you plan to cook the Sopas for dinner. After soaking, drain the water from the cashew and rinse it with fresh water. Place them in a blender, add 2 cups of freshwater. Close the blender and run it at high speed for 1 minute. Place that aside once finished. 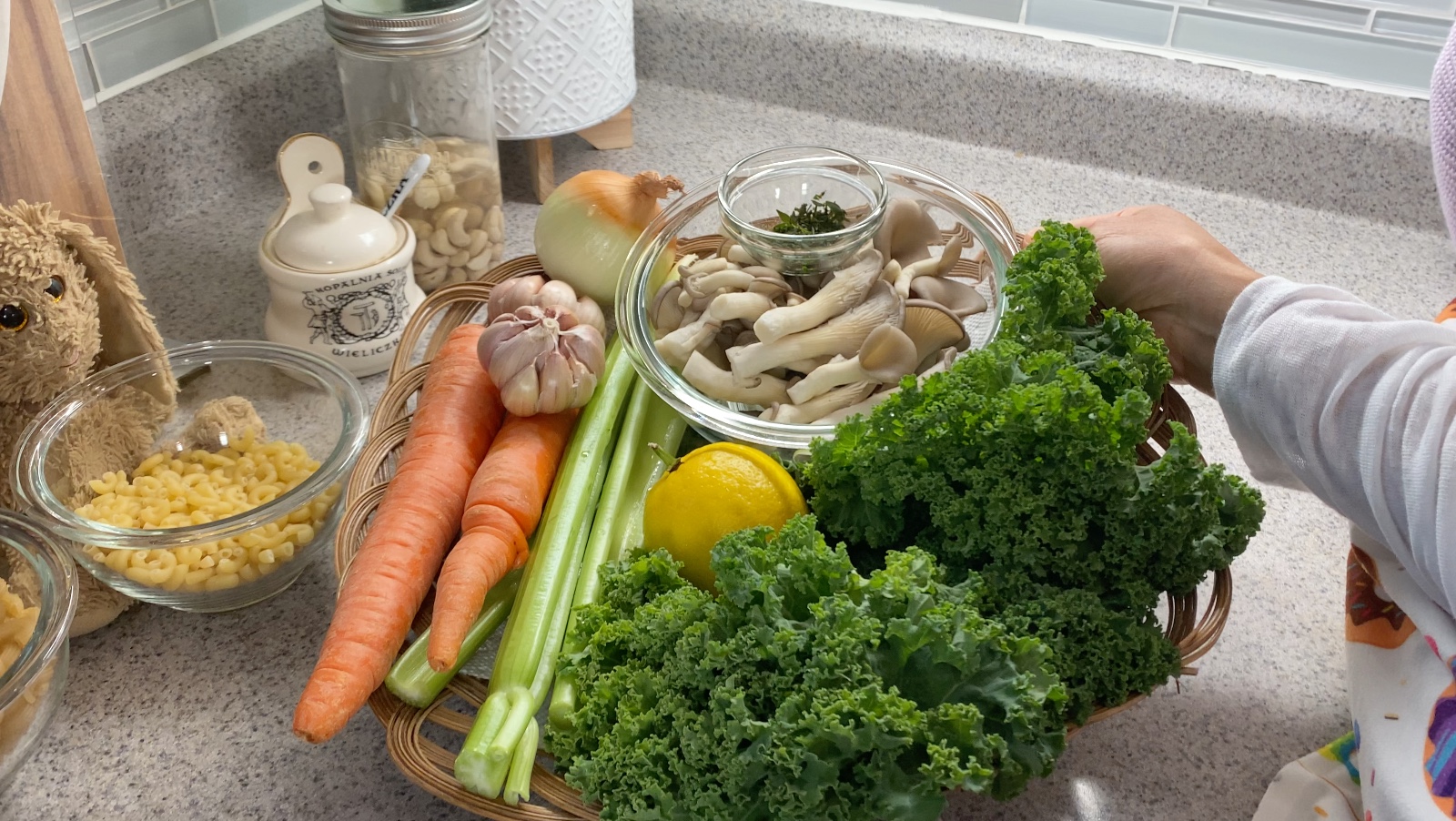 First, wash all the vegetables. Slice the peeled carrots into small cubes together with the celery. Shred the black oyster mushroom. Vertically chop the kale into half an inch. Cubed the onion and chop or mince four garlic cloves for cooking and eight cloves for fried garlic garnish. I chop the garlic very finely for the garnish, which is optional as not everybody likes fried garlic.

To the stovetop, turn heat to medium temperature to warm up the pot. Add 1 tsp grapeseed oil. Once hot, fry the garlic garnish first. Keep mixing to avoid burning until garlic is golden brown and crispy. Transfer the crispy garlic into a small serving bowl for later. Add 1/2 tsp grapeseed oil at the same temperature using the same pot. Once hot, add onion and the remaining chop garlic, sauté for a few seconds, then add the thyme. Sauté for at least 1 minute, add carrots and celery, and continue cooking for another 3 minutes. Add 6 cups of liquid vegetable broth or two vegetable cubes with 6 cups of water. If using a vegetable cube, I like to liquefy the veggie cube first with a bit of hot water before adding it to the pot with the water. Bring to boil. Once boiled, add shredded black oyster mushroom and elbow pasta, bring to boil again and cook for 5 minutes. While cooking, scrape the pasta at the bottom of the pot as it tends to settle down. After 5 minutes, add the 2 cups of plain cashew milk and bring it to a boil. This time you can add pepper and salt to your liking before adding the chopped kale—Cook for another 1 minute, just enough to get the kale wilted. To serve, drizzle it lemon and sprinkle it fried garlic to finish. Your most-awaited, mouthwatering, creamy soup is now ready to serve. 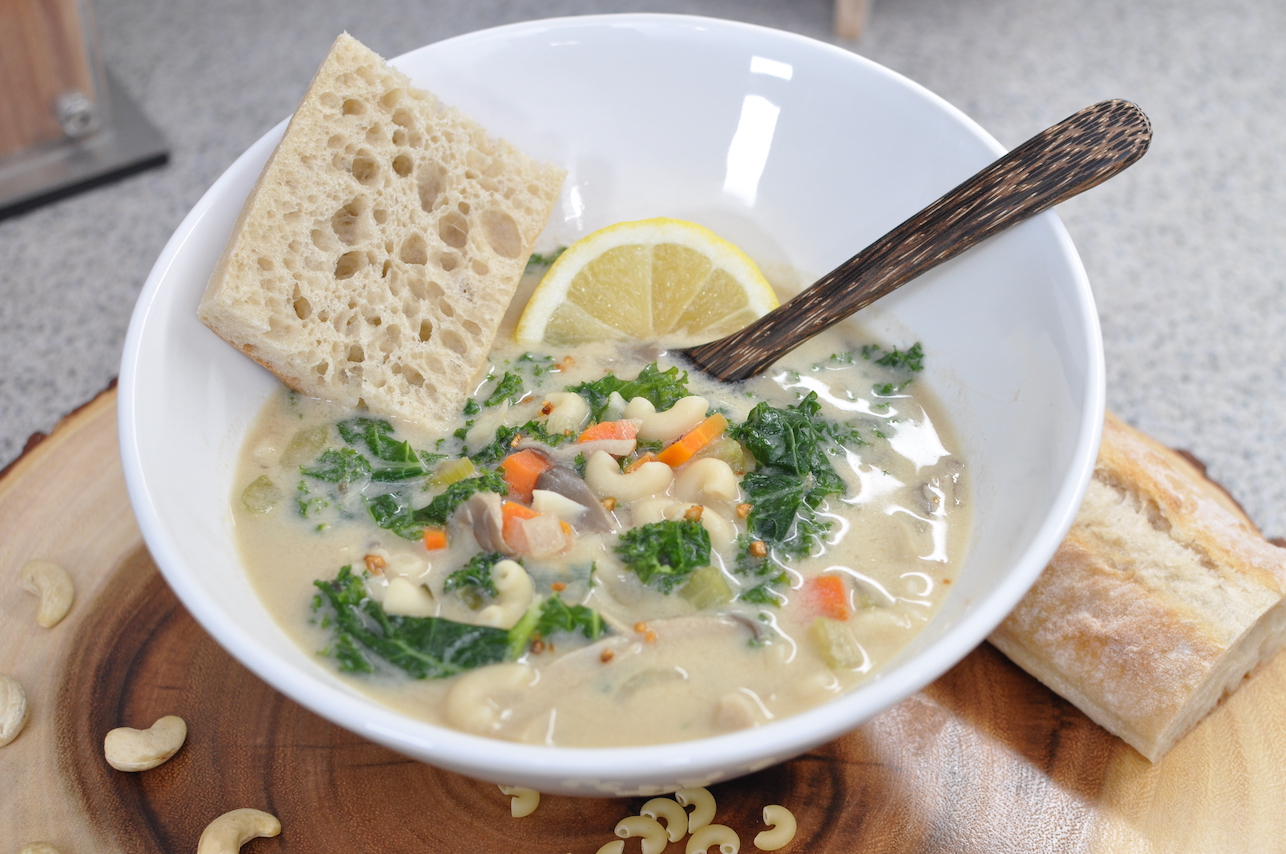